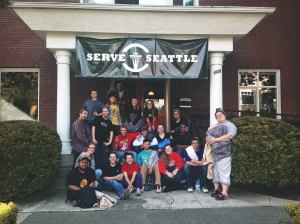 One week ago, I was temporarily “living” on the streets of downtown Seattle for a total of three and a half days. This social experiment was a requirement of my urban missions institute (Serve Seattle) that is coming to a bittersweet finish at the end of June. The title for this adventure: the Urban Plunge. The objective for this adventure: whatever you want it to be.

I personally don’t believe you can really put a number on such an out-of-body experience before it occurs. Sure you can have some expectations…but when you’re to be blindfolded and driven to an unknown location; when you’re to be dropped off with nothing besides the clothes on your body (not even your OWN clothes!), two dollars in quarters and an ambiguous clue to find shelter; when you’re told to survive for the next 72 hours without your usual normative resources, you just can’t be too positive of what God has already got in store for you to learn.

Let me fill you in on what my personal experiences were like during the epic plunge: [excuse my laziness for the following format]

The urban plunge was an exceptionally humbling and valuable experience that brought insight, enlightenment and compassion into my life.

I’d be a fool to ever forget it and the transformation it caused.

One thought on “The Urban Plunge: Experiences, Convictions & Reflections”